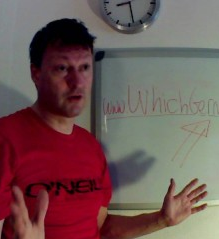 Hi, my name’s Kevin and I’m a Linux IT Systems Consultant from London, England but I’ve lived in Europe, US and Asia over many years.

I studied Economics & Politics at the University of Bath, graduating with an upper second class degree. I also did an Institute of Linguists Diploma in German, plus a Postgraduate course in Marketing. I spent a short time working in the media sales sector in London before moving to Berlin, Germany.

The Web and Internet was taking off and I wanted to be part of it. After completing a one-year graduate training course at Siemens in Berlin as a Unix IT Systems Engineer I worked at the University of Potsdam as a Systems Administrator, before switching to become a freelance IT contractor.

Since then I’ve contracted at many big-name companies, among them consumer goods manufacturers, pharmaceutical and auto manufacturers, banks, software houses, research institutes, and higher education colleges, internet providers, government departments, and others, as well as a number of small startups.

Along with my native English I also speak fluent German (holder of the Institute of Linguists Diploma in German) as well as Dutch (holder of Language Certificate in Dutch as Second Language RG2, issued by the Flemish Community Government in Belgium).

You can find my LinkedIn Profile here: https://www.linkedin.com/in/kevinrwells/