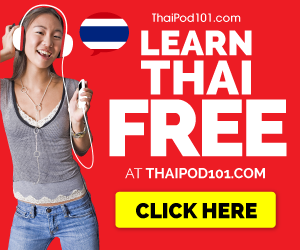 While I was living in Bangkok I made a trip down to Malaysia by train on two occasions, visiting Penang and Kuala Lumpur.

The express sleeper train from Bangkok, Thailand to Penang in Malaysia is designated an express, but it’s not an express in the way we understand it in the West.

The train is maddeningly slow, trundling it’s way along at a speed hardly faster than the local commuter trains in Germany. I think the express bit only means it stops at fewer stations than other trains. 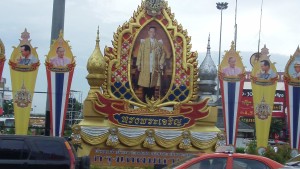 Part of the reason for the slow speed is that the track is a narrower width gauge than the standard gauge used by railways in Europe and elsewhere. 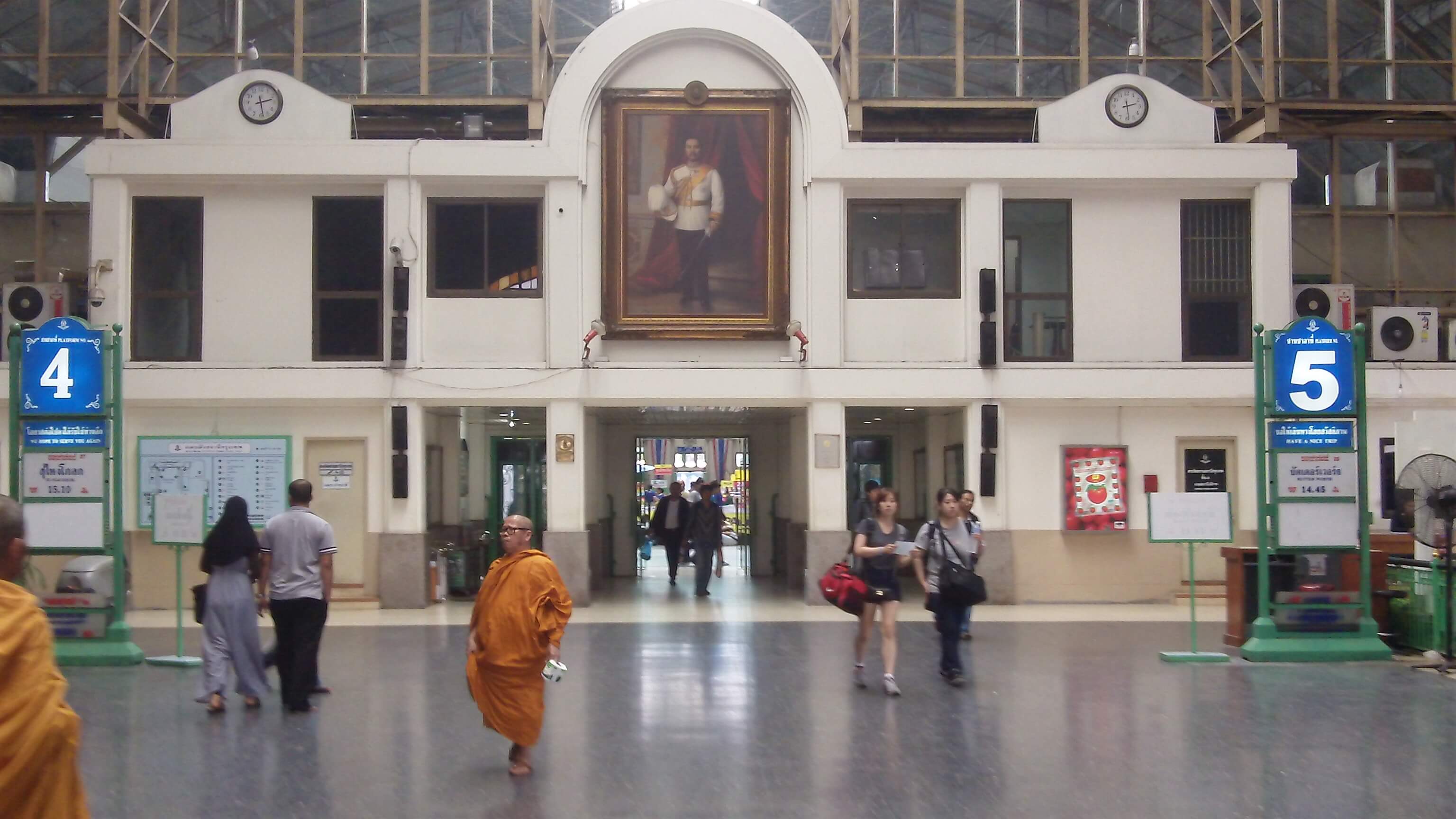 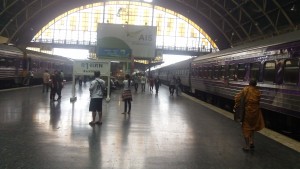 As a result the journey takes the best part of 24 hours. You leave Bangkok at 2.45pm, arriving at Butterworth at 1pm next day. 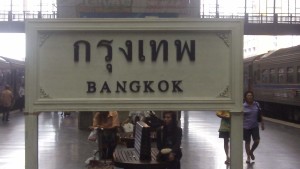 This is the main station terminus in Bangkok. Note the portrait of the King above the passageway to the platforms, and the Buddhist monk in the foreground.

There are a number of scammers floating about the station concourse, mostly sales reps for private travel agencies in the station who try to get talking to you and entice you to come to their office to book tickets, hotels or other services.

You don’t need to go near any of them. Get your tickets from the official railway ticket counters on the ground floor concourse. 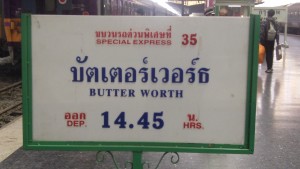 The train is a sleeper, with seats which convert into bunks at night. Conductor staff set up the bunks for passengers. Clean bedding is provided and is included in the ticket price.

There are rudimentary wash basin facilities, but no showers. And of course WCs also on board. The train also has air conditioning.

There’s an online food and drinks service at extra charge, but the prices are 3 to 4 times those of average Bangkok street food.

The train doesn’t actually go all the way to Penang. This is because Penang is an island and so when you get to Butterworth where the train terminates you need to take a ferry across to Penang. 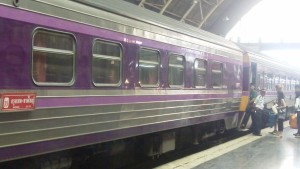 Butterworth sounds like the name of some quaint village in rural southern England, but it’s the industrial harbour town across the water from Penang on the Malaysian mainland (see pics below).

I think the Butterworth-Penang ferry journey took about 20 minutes. 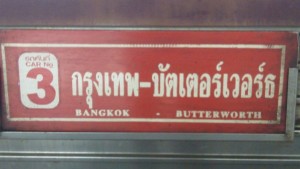 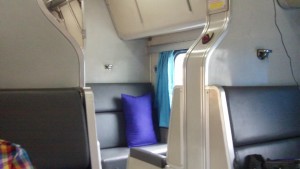 My train carriage was only about half full on the way down to Penang from Bangkok.

The seating bay opposite me across the gangway was occupied by an elderly Thai couple.

The man took his shoes and socks off and sat cross-legged up on the seat silently reading a newspaper. He hardly said a word most of the journey.

His wife meanwhile sitting opposite him kept up a non stop natter which sounded to me just going by the tone of voice to be one endless long nag. God knows what she was talking about.

I don’t know whether she was really nagging him or was just having an ordinary talk. It’s not always easy to tell with Far East Asian tonal languages, where the tone has more to do with word meaning than mood intonation as with European languages.

But apart from when they finally bedded down, her non-stop nag-like monologue went on and on with hardly an interruption for most of the journey. Ducking stools eventually came to mind.

Sitting opposite me on the train to Penang was a young German student, about to start university back in Germany to study something called Mechatronics, which apparently is a combination of electronics and mechanical engineering. 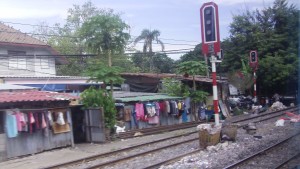 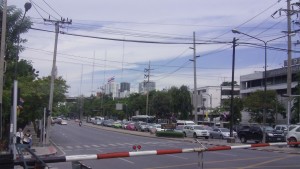 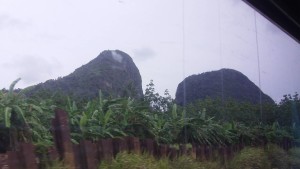 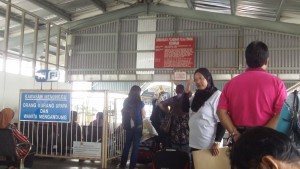 He’d just spent a month travelling solo by camper van around the northern rim of Australia.

He then flew from Australia to Bangkok where he spent a day and was now on his way to Singapore to catch his return flight to Germany. He planned to spend 2 days in Malaysia, one day in Penang and a day in Kuala Lumpur before travelling on to Singapore.

On the journey back from Malaysia to Bangkok my carriage was much busier and included several Westerners. A lively mixed boarding school atmosphere prevailed.

In my carriage section there was an American female graduate from Boston who had just finished an English Literature major and who was on her way from Singapore to Chiang Mai in Northern Thailand.

A woman school teacher from England who was spending a month travelling in SE Asia and was now going to Bangkok, and sitting opposite me, plus a tall young Dutch student who had just visited Langkwai in Malaysia and was on his way to Thailand.

And finally a middle-aged rather outspoken American from Chicago living in Penang who was the source of much amusement to all. The first thing I asked him was what he was doing in Penang, to which he replied: “Getting the hell out”.

He worked as a computer programmer in Penang and was going to Bangkok to escape the entire Ramadan period. In response to my questions asking about how he found it living in Penang, he said “Really weird. And the longer you stay, the weirder it gets”.

I gather the main thing he didn’t like was the conservative Islamic aspect of Malaysia. Penang – like Malaysia in general, is actually a multicultural place, with a population comprised of different ethnicities – Malays, Chinese and Indians.

The population of Penang has proportionately more ethnic Chinese than for example the capital Kuala Lumpur.

He said the different ethnic groups hardly seemed to mix with each other, they had formed parallel societies. 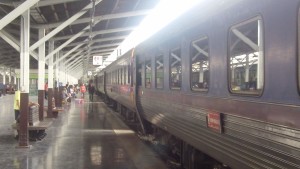 Chicago, as I nicknamed him, spent most of the journey watching films on his laptop, mainly Sasha Baron Cohen stuff – Ali G, Borat, etc which he thought was hilarious.

He also managed to fall out with Dutch Boy. The train had stopped for a break at a station en route, and we got out to stretch our legs on the platform.

On re-boarding the train, Dutch Boy placed his large rucksack in Chicago’s luggage area by mistake, taking up the entire space. 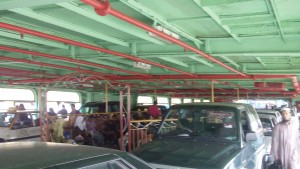 Chicago following on behind then exploded at him, saying “You know you are such an asshole!”.  I thought his sudden aggressive  response a bit uncalled for. Dutch Boy was taken aback and shrugged and moved his rucksack.

As we settled down in our seats, Chicago said to me loudly: “Don’t you think young people these days are so selfish?”. This was intended for Dutch Boy to hear and he just made a face. They were no longer on speaking terms. 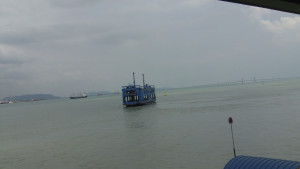 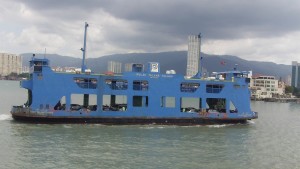 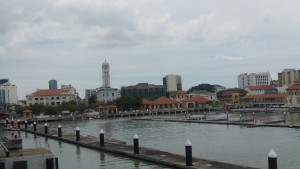 I stuck up for Dutch Boy, replying “I think old people can be pretty selfish. Some of them have a real sense of entitlement just because of their age”. Chicago gave a laugh at this and went back to his laptop and Ali G.

I chatted to the two women across the gangway, and to Dutch Boy opposite, who was telling us about his experiences on Langkwai. He had spent a few days at an Airbnb stay offered by a gay Malaysian guy.

He had known the guy was gay when booking and had no problem with that. But shortly after his arrival the guy had begun to make advances to him and was telling him all his fantasies. “And you don’t wanna hear them, believe me!” Fortunately he was leaving next day.

The German student was also stopping off at Penang before catching a connecting train from Butterworth down to Kuala Lumpur later that evening,  which was where I was also heading.

He tagged onto me and so we went around Penang together in the limited number of hours we had available, visiting a Hindu temple, a mall in the city centre, and having a vegetarian Indian meal.

We had checked with the transit information office who assured us there would be a ferry back to Butterworth in time for our train.

But come the time to catch the ferry, we discovered the information we had been given was incorrect, and that the next ferry wasn’t due for over an hour, which meant we would miss our train.

The only alternative left to us was to go by taxi via the highway road bridge which goes across from Penang to Butterworth, though a much longer route than the ferry link.

However, try as we could, we missed the train by a few minutes. We ended up taking an express overnight bus – which ironically got us in to Kuala Lumpur before the train was scheduled to arrive.

The German student checked into a budget hotel to get some sleep and with that our ways parted.

Final pic above shows the ferry harbour at Penang.

For full info and up to date details about schedules and ticket prices, for the train to/from Bangkok and Penang, I recommend the excellent Seat61.com website at http://www.seat61.com/Thailand.htm

That’s all for now. In the next post I’ll show you some pics of Penang.

How To Declutter Your Home
Pictures of Penang